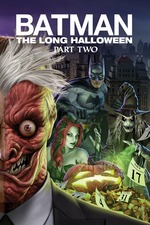 The whodunnit became obvious quite quickly, yet it unravelled nicely nonetheless. The whydunnit seemed to make logical sense but dampened the impact a little. Something a little better seeded could have helped but might have been avoided to keep the mystery intact.

A superhero common problem rearing its head again was the usage of powers. Ivy, in particular, seemed too powerful at times and conveniently less so when the plot needed to move forward. Loses half a star for that.