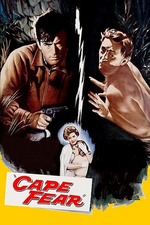 Living in a shell, I came into this blind, neither having seen this previously nor the version Scorsese made. For that reason, I probably enjoyed the ambiguity that it begins with. A guy out for revenge, yet remaining within the limits of the law, so that he wouldn't get any legal trouble interested me more than had it been otherwise. Perhaps for that reason, when the line is crossed, it loosened its grip on me.

Overall, I enjoyed it, but the play-out became more predictable and It became less engaging for me as it moved closer to its third act, which held good suspense, but lacked a surprise element which could have heightened the climax.

Good for its time for sure. Enough to egg me on to check out what Uncle Marty did with the story, but I imagine that it too will have a similar vanilla narrative. At least I'll expect a better crafted visual version for a later generation of viewers, but one can still hope.