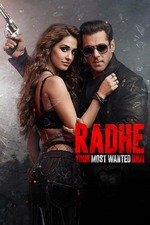 Frankly, I shouldn't have bothered. I have no idea why I watched this, never mind seeing it through. It's terrible. Here-on is just me trying to convince myself why I saw this.

Some years ago, I saw Bharat and then dipped into the original it was adapted from. Ode to my father is such an Indie film, that whoever thought Bhai was going to pull this off in a commercial space was probably high.

This brings me to Radhe, a drug busting super-cop, half-inspired by a character he played over a decade ago in which we didn't know he was a cop which in part was why it worked and half-inspired by The Outlaws, a Koren film based on a true story of how an area was overnight cleaned of all its criminals overnight due to an outsider coming and shaking things up.

If you watch The Outlaws, which I'd strongly recommend, you can totally see it as something that could be adapted for the Indian audience, and you can't help but think of anyone but Bhai for the role. This remake made sense. I was excited, truly.

Then dropped the trailer. Holy crap! "WTF have they done?" was my first response to it. How on earth can they take a masterpiece and make it loo worse than Race 3. It must be a bad cut of the trailer, surely.

Cut To: Today. I can confirm it's worse than Race 3,
Despite this, if you do want to see it, your business is your business, none of my business.