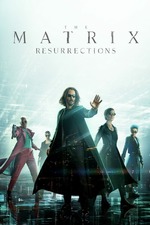 Alright, so it’s taken me almost a month and a repeat watch to gather my thoughts on this one, finally concluding that I enjoyed it a lot despite its flaws — in the exact opposite way that I was unable to enjoy Spider-man a week earlier despite the same reasons holding true.

What they have in common requires going back a couple decades in time. Another world, another era. What each of these first in a franchise had achieved. In a sense, Spidey, for me at least was nothing new, while The Matrix was groundbreaking. Both had amazing effects but the Matrix didn’t rely on them. The primal fear of the rabbit hole did most of the work.

These updated versions both are nostalgic, but the Matrix got on with it quicker and corrected the wrong turn of its sequels while Spidey remained a one trick pony — Déjà Vu, if you will. *wink*

Putting Spidey aside, Resurrections added layers to its foundations and justified its existence fairly. Within its universe, it made sense for the most part.

The new characters were great, the evolved technology and politics also made sense. Basically, two thirds of the film went well — and then it kinda lost its way in its own reflections. That’s what the sequel should be called if they do another. Matrix Reflections.

It felt like they had an end in mind and hacked together a means to reach it. It did a good job of answering a lot of questions with tongue in cheek callbacks, but after two hours of it, the new questions it was raising became difficult to ignore.

That’s where I probably felt conflicted. On the one hand I enjoyed it a lot, but in the other this was not a complete experience. It’s still a more rewarding experience that Revolutions. I’d still recommend it.