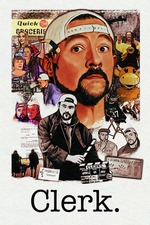 A nice retrospective on the life and career of someone who we pretty much know everything about already, now just stitched together chronologically. It's nice seeing some of the old familiar faces like Mosier floating around, and it's cool that so many of the actors from across Smith's filmography, big and small, are more or less all here. But goodness, I wish they were able to make this a brisk 90 minutes.

My biggest problem is that it's two hours and covers every single one of his films. You get the sense, considering what little there is said about the films from Cop Out onward, that a lot of that could've been condensed or even skipped over. Even the best retrospectives leave out some titles.

But one thing that's undeniable and is clearly showcased here, is just how much of a genuinely sweet and thoughtful person Kevin Smith is and how there really isn't a phony bone in his body. When the guy is crying after Marvel movies, it's 100% him putting himself out there like he always has done.

There is something nice about hearing the story of a guy who found out what made him happy, managed to turn that into a career, and got to do it with the collaboration and support of his friends. So for me, Smith is nothing if not a huge influence on my own path, regardless of my thoughts on Yoga Hosers. I'm lucky enough that every week I get to work with my closest friends because somehow we managed to turn what we started into an actual career, and if we're being honest here, a large part of that all existing is because we saw him do it first.

Think what you want about the guy or his filmography, but I'll always be just a little bit in his debt and there are worse places to be for sure.