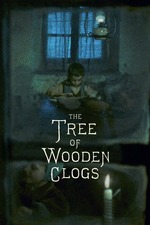 The Tree of Wooden Clogs

Italian neorealism has always been my weakness, at some point it doesnt matter how tough you claim yourself to be, you'll always end up crying, this is no expectation.

The pacing is good but honestly, the films is long, way too long, id say in my opinion it might have been shorter in order to achieve its message and not bore the viewer, but at the end, the artist is not to be judged but understood.

As per the cinematography, the work here is truly fantastic and breathtaking. I never reviewed any film with such long paragraphes and this many words but after this i think i might. To conclude, i was kinda mad that the film was a little bit long because i didnt wanted to end up hating it because it bored me at some point, but thats not the case because the story itself makes for it, if you want a 3 hour long beautifully shot, existencialist film, about rural life and simple people, watch this, it would bring you down to earth.