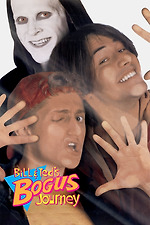 Much like Beavis and Butthead, the Bill and Ted movies prove that two complete idiots as your leads doesn’t mean the movie won’t be creative and an overall well put together production. The basic premise is still there - the two unlikeliest heroes must save the world, but getting to from point a to point b ends up at point x and y. Never are consequences taken seriously because the plot itself makes no sense - why are THESE two the heroes - and the movies know this, and aren’t afraid to have fun and show how idiotic this can all be, while still existing in within the universe’s rules. Within the movie's plot and conflicts, I was impressed with how consistent they followed their time travel rules, though upon further reflection, these rules are contradicted after the villains are defeated, perhaps I would hold this more against the film if it lead to their success in the plot.

The movies both scream the decades they were released in - but I think an underappreciated quality that has made these so beloved is the avoidance of cliches from movies with similair leads of the time - there's no high school bully that must be humiliated, there's not really a fatal flaw that needs to be fixed in a moment of character growth that in this film, and that's okay for a movie that knows how stupid this all is and how great these characters are in random scenarios. Bill and Ted are instantly likeable - you want to see them succeed.

The first felt like the story direction was set up for many gags and this has that same feel - but I think the journey here was a bit more focused. Many times sequels tread the same water as the first installment, but Bogus Journey takes a different direction and goes even more batshit than the first - I think I like this one better than the first for that.