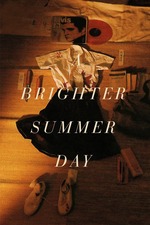 An epic coming of age story, of Taiwanese teens struggling to find an identity while slowly growing detached from the reality of violence.

A Brighter Summer Day is a highly praised 4 hour long film from Director Edward Yang, and while it is a long journey I am glad to say the story's prolonged build up is worth it. The film is about a boy named Xiao Si'r who is starting classes in night school. His father worries that he will fall in with the wrong crowd, and not live up to his potential. The movie takes place in Taiwan, which is an island nation off the coast of China, where many Chinese people fled to when communists took over their country in 1949.

The story picks up in 1960, and for the first half mostly revolves around two rival gangs called the Little Park Boys who Xiao is a member of, and the 217s. Another one of the Little Park Boys is a smaller teen that likes to sing American songs, that Xiao's sister is nice enough to help him translate. So the name of the film A Brighter Summer Day, actually comes from an Elvis Presley song that she works on for him.

You get the sense that while Xiao's family has set up a new life for themselves after leaving China, they do still have a longing for their home land. Xiao's father has a cherished radio that he got in China that he holds onto despite it not working very well. I feel the radio is a key symbol of the family's Chinese heritage and honor. We see that people in the story have to beat on for it to work, hinting that as time goes by the family's connection to their homeland is being 'beat' out of them.

One of the broadcasts they listen to features a list of distinguished students, but Xiao's name will not be included because despite how smart he is, he is allowing his association with the gang to drag him down. We get a sense that if Xiao was back in China and not involved with these gangs, he would be honorable and live up to his father's expectations of him as a student. Meantime Xiao's mother has a cherished watch she has from China, that becomes a source of conflict when Xiao sells it to pay off a debt. In this really dramatic shot towards the end of the film we see Xiao's point of view of his father restlessly beating his brother, after he takes the fall for Xiao not ever being able to recover the watch from a pawn shop.

I was thinking throughout this simple story that it did not need to be this long, since much of the runtime was being spent building up so many side characters and on long shots. I found it difficult at times to keep track of the names of all the characters. Especially all the girls who the Little Park Boys get involved with, which become a prime source of conflict leading into the climax.

Many of the long shots I mentioned include beautiful photography of nature. Yang uses this interestingly muted color palette, but some how still manages to make the colors of the flowers, and greens in trees really pop. I would say my appreciation for this long narrative, did not come full circle until the tragic events of the climax, and I loved how much the build up of the film's themes played into that.

So while the teens of these street gangs search for their identity, they are also becoming more and more detached from the reality of violence. This first comes into play during an initiation, where one of the boys smacks a kid in the face with a brick, and then all the boys stare in complete disbelief about the kid having blood streaming down his face. In the second half of the film Xiao's father goes under integration, as Government officials look to him to help locate any communist spies. So while these parents have high expectations for their sons, they are often distracted and ignore their children which allows them to fall into this cycle of violence.

The violence builds throughout the film and takes you by surprise. There were a couple of times when the sudden violence made me gasp in disbelief, since it would come out of nowhere and sometimes not even be shown. For instance the scene when Xiao hits the principle of the school with a bat, but we only see a hanging light be broken. We only know what actually happened based on Xiao's conversation with his father afterwards. This creates not only a detachment to how Xiao sees violence, but also hides what he is capable of from the audience, which makes the climax even more shocking.

The conflict with the two gangs comes to a head toward the middle of the film, when a former member of the Little Park Boys get killed. His gang then seeks revenge by attacking members of the 217s, and one of the Little Park Boys comes equipped with a samurai sword. It is strange that we barely hear about the fallout of this battle afterwards. Also I found that much of the fight being in the dark, made it kind of hard to see.

Due to the pressures from his school, family, and relationships with girls, Xiao finally snaps and kills a girl that he spends must of his time with named Ming, by stabbing her. Immediately after he commits this act, we instantly see that he is in complete shock and disbelief about his action. After her death our impressions of her sexual relationship with a Doctor are confirmed when members of the media swarm his office. This relationship with the Doctor that she was likely pressured into, may have been why she became so upset by how Xiao was trying to support her, but in her mind she thought her was trying to change her. I found it very interesting throughout the film that while we can hear Ming and Xiao talking to each other, the two of them are often either out of frame, or Yang has the shot zoomed in tight on their shoes or something so we can not see their faces. This might hint that Ming never had a clear image of their relationship, which may have led to their fatal dispute.

The film is actually a true story about the first juvenile homicide case in Taiwan, which was highly debated and ultimately the boy was only imprisoned for 15 years, instead of getting the death penalty.

There are two truly heartbreaking scenes at the end of the film. One involves Xiao's sister who we see performing in a church choir, and once you spot her in the crowd, we can see tears streaming down her face. Then in the final shot we see his mother standing frozen while doing the laundry after she comes upon her little boys shirt, and we can hear the radio once again listening the names of distinguished students, that Xiao will never be apart of.

A Brighter Summer Day is an amazing emotional journey that is well worth your time getting investing in.