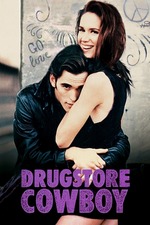 Easily up there alongside the likes of Easy Rider, Bonnie and Clyde and Badlands as one the best cult American road movies.

Gus Van Sant is hit and miss as a director but this is one of his best and most overlooked achievements. Matt Dillon really brings his character to life with a genuine portrayal of a street smart dope fiend looking to go straight after a major mishap and Kelly Lynch is his perfect partner in crime.

The photography is brisk and fleeting which keeps the film in motion, just like its gang of junkies who constantly move from apartment to apartment and across the Pacific Northwest. There's also some interesting surreal imagery inserted when characters get high, which does look a little dated now.

It's a very cool and entertaining movie, with hints of black comedy, French New Wave and classic noir. The nineties was a great decade for the revival of indie cinema and Drugstore Cowboy was an early sign of things to come.