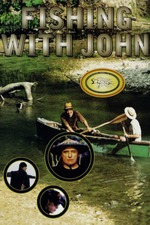 Having now seen all six episodes of Fishing with John I still couldn't tell you what exactly it's about. I could relay some of the plot points, but that probably won't be of any help—Tom Waits puts a fish in his pants and gets upset, Willem Dafoe dies of starvation after running out of cheese crackers and then Dennis Hopper gets high on sugar, plays ping pong and gets hypnotised by a giant squid. In any case, it certainly isn't about fishing.

Occupying a weird space between documentary, mockumentary and scripted talk show satire, this short lived nineties TV series is certainly an oddity. Conceived, directed by and starring John Lurie, probably best known for appearing in several early Jim Jarmusch films, each episode involves Lurie taking one of his equally eccentric celebrity friends (Jarmusch included) fishing and that's essentially it—like a low-key precursor to Comedians in Cars Getting Coffee, albeit with an absurdist twist, the show is refreshingly free of contrived narrative and forced laughter, finding humour in the mundane and frequently bizarre, possibly improvised interactions between Lurie and his guests who are really just looking for an excuse to hang out.

"The fishermen wake up excited to be alive. They hope for good weather and good luck. Both fisherman are covered with sores and boners." Uhhh—yeah, the less said about the narrator the better, this quote should suffice. I could see myself re-watching the Dafoe-Hopper episodes on a regular basis.