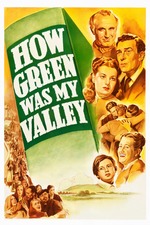 How Green Was My Valley

John Ford's mastery of framing, composition and landscapes is perfectly suited to this yarn set in the Welsh valleys. He brings his experience from working in the Western genre to shoot this beautiful period drama, which has everything you come to expect from him, but without a single gun or John Wayne in sight.

His rigorous workmanship an simplistic camerawork lets the actors and the staging do the heavy lifting. Human drama and character study has always been central to his stories, he ladles in the sentimentality and nostalgia, sometimes a little too heavy but the images speak for themselves. So many shots are memorable and will stick in my mind for a long time.

it builds a strong sense of community in the village by having as many characters in the frame at the same time, the villagers are seemingly always around, filling the lens with grubby faces as they sing and march down the road.

It captures childhood innocence and the corrosion of youth in a way that many movies fail to and despite its overly pious tone it is wonderful piece of cinema that will reward the patient viewer whilst putting others to sleep.

Did it deserve to win Best Picture over Citizen Kane and The Maltese Falcon? Probably not but this has been debated to death and shouldn't cloud the film's reputation.