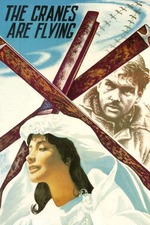 The Cranes Are Flying

Breathtaking in its visual beauty, astonishing in its expressive camerawork and humbling in the way it truthfully portrays Soviet life through the simplest of stories, Mikhail Kalatozov's extraordinary antiwar masterwork boasts a level of humane honesty rarely seen before from this side of the iron curtain.

Strip away all the technical elements and The Cranes Are Flying is little more than a melodrama - the man goes away to war, facing death everyday whilst the woman remains and is challenged by her own devotion. Under more conventional direction this could have been dull and lifeless but what Kalatozov and cinematographer Sergey Urusevsky did here is nothing short of visual poetry - in every frame, movement and composition.

An early scene of the young couple, Boris and Veronika dancing along a cobbled street is straight out of a Chaplin film, brimming with joy and passion and later there's a sequence where Boris runs after his lover up several flights of stairs, the camera joyously following his every step through an impossible tracking shot, which to know how they did it would ruin the magic of what is simply stunning cinema.
The performances are beautiful, most of all Tatiana Samoilova as Veronika, who conveys enormous empathy with the utmost subtlety and eyes that sparkle with the intensity of being.

Rarely is the movement of the camera able to convey so much emotion, this is a film you experience with visceral adulation rather than merely watch, culminating in an heart-stopping crescendo with superimposed images of an imagined future over spinning treetops, accompanied by haunting music that wallops you right in the feels. The mask of propaganda briefly slips and we see the Russian people for who they really are - flawed, in love, mothers, fathers - but mostly crucially, just people, living their lives amongst the authoritarian geometry of angular concrete and steel, willing to fight to protect the ones they love. Truly devastating.

Streamed on The Criterion Channel.