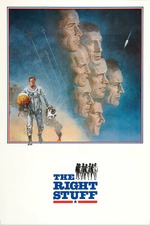 Philip Kaufman's The Right Stuff feels like one of the last great American epics, an audacious, energetic three-plus hour thrill ride of historical fact based entertainment, comedy and family drama interwoven across a vast canvas and multiple characters. Naturally, it flopped at the box office in 1983 and has become quite forgotten about, admittedly I had never heard of it until my local cinema announced it as part of their space season.

Based on Tom Wolfe's book of the same name, it certainly earns to right to be called novelistic. Beginning in 1947 with ace test pilot Chuck Yeager (who is amazingly still with us today) first breaking the sound barrier, it charts the subsequent quest to 'push the envelope' further as the American space program begins and the space race with the Soviet Union erupts in a furious battle for superiority. Many of the people portrayed have criticised the film for its inaccuracy yet it remains a breathtaking feat of cinema that fully warrants its gargantuan runtime, not a minute feels wasted as plotlines and characters are gracefully given the depth and breathing room they need to be compelling. Sam Shepard's Yeager embodies the ambition and daredevil spirit of the story, his presence felt even after he becomes a secondary character when the space race begins.

Docudramas run the risk of being too dry and uncinematic but The Right Stuff avoids these pitfalls, remaining exhilarating and beautifully filmed with powerful humanist drama and satirical humour always able to healthily balance out the more technical scenes. Beginning symbolically amongst the Joshua Trees of the post-WW2 Mojave Desert, it embraces the western mythology and romanticism in exploring this new, final frontier as these astronauts were essentially the next generations cowboys. By the end you feel as though you've truly been a part of something special, having shared the intricacies and intimacies of this new brotherhood across a sprawling fifteen or so years. It emulates the American spirit without ever succumbing to overly patriotic flag waving.

Gene Siskel and Roget Ebert both agreed this was the best film of that year and although arguably flawed, its audacious scope and consistently rousing storytelling is thoroughly deserving of wider appreciation.