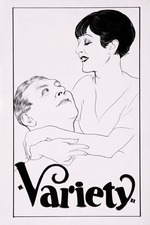 Varieté is an another criminally under-seen gem of the silent era, a masterfully presented melodrama with an unsurprisingly magnificent performance from Emil Jannings, astonishingly creative cinematography from the creator of unchained camera itself, Karl Freund and very creative direction from E.A. Dupont.

Heavy expressionist visuals like the opening shot of the prison hallway make way for stunning acrobatic sequences where the camera is seemingly hoisted up by performers and spun up on the ropes for dizzying circus sequences. The bleak narrative that was censored for American audiences features a fascinating love triangle in which a man who betrays his wife is in turn betrayed by his mistress. The carnival is presented as a sensual underworld of burlesque and debauchery, Dupont wasn't afraid to show fully topless women or show off Lya De Putti's voluptuous figure at any given moment.

The Masters of Cinema Blu-ray print looks as pristine as it most likely ever will and even comes with three different scores, one of which is by a band called the Tiger Lillies and is very controversial going off some of the comments here. I'm glad I followed the general consensus that it should be avoided as after listening to it for a bit out of curiosity I have to concur that it's pretty dreadful. Stephen Horne's score is much more suited to both the film and silent cinema in general.