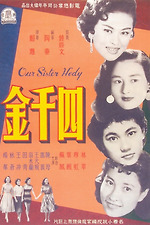 Our Sister Hedy may be the most interesting of MP&GI's productions (even though I prefer their Grace Chang vehicles). The film takes up a tradition of "modern women" films that finds its origins in Shanghai films Three Modern Women (1932) and Women Side By Side (1949) in which actresses play out different archetypes of modern women. Our Sister Hedy domesticates this tradition by situating it within the bounds of the family. With a widowed patriarch at the symbolic center of the film, each sister represents a different form of modernity. Hilda, the eldest sister, is hardworking and serves as a surrogate mother to her younger sisters. Helen, the second sister, is an artist and a seductress. Hedy, the third sister, is a precocious tomboy who constantly tries to please her sisters. Hazel, the fourth sister, is a young girl who decides to marry before turning eighteen. These basic character types were well-tailored to the actresses who give remarkable performances.

The film begins with the patriarch's birthday party and covers a year in the life of the four sisters. They get involved in relationships with different men, have conflicts with each other, and ultimately grow in different directions. Watching it for the second time, I was surprised by just how packed with plot the film was without overwhelming me. The film's economic approach to characterization really worked well in this case.

Aside from Hazel, all of the sisters are really fascinating characters. Helen, in particular, plays an interesting Latin-inspired role that echoes the femmes fatale of film noir and rumberas films. But I think that Hedy, the big crowd-pleaser of the film, is my favorite. Her meddling into her sister's relationships lead to both humorous and tragic moments. Her quirky performance reminds me a lot of Faye Wong in Chungking Express.

The film is emblematic of the cosmopolitan modernity MP&GI reflected in its pictures. The film is heavily influenced by Hollywood's use of continuity editing, simple effective compositions, and narrative clarity. It also takes up film noir aesthetics and Latin music in its depiction of Helen. Interestingly, the second half of the film moves into a more elliptical approach (I don't think it works particularly well though). The film is fun, melodramatic, and cosmopolitan all at once. It inspired other 'modern women' films like Ang Lee's Eat Drink Man Woman as well as multiple remakes. Its status as a Hong Kong classic is well-deserved, and I hope that it gets more attention from Western audiences!

Also, fans of Indonesian cinema may notice many similarities between this film and Usmar Ismail's classic musical Tiga Dara (1956). I wonder if there is something to that..

The Temple of Wild Geese