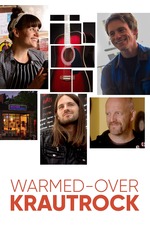 Well so when I read the description of this last night I put it on first thing when I awoke, because it was basically made for me.
Yeah, this is one of those love letter films, made in an effort to high five those of us in the X generation, whose one true God was music, in a world where now God is Dead. There's just a few characters in this, but I knew all of them, I was all of them, and it really felt like a kind of eulogy for my life in Chicago, when I defined my existence by my stacks of records, my knowledge of music, obscure references... you know, all that snobby bullshit.
I got $9K for my vinyl when I sold it and left Chicago.
I have a bachelors in audio engineering.
I worked at studios, venues, a music rehearsal space, I DJ'ed, I went to shows most nights of every week and I was known by name at every record store in that city.
When it comes to Krautrock alone, I've seen Neu!, Holgar Czukay, Damo Suzuki, Cluster, Harmonia, Faust, Kraftwerk... oh I mean it all bleeds though right right then it slides into the Boredoms and - well, yeah, let's just not get me started about music. After all, that's not the kind of music the kids listen to anymore anyway. Even though it's the Essential Music.
This movie is about the closing of the Silver Lake record store Essential Music, and yeah it gave me all the feels.
There were so many lines in this that made me get that tucked-chin grin. You know that grin that accompanies that closed fist tap to your chest?
It’s amazing how one great show can make up for everything else in your life. It’s like chasing a high...
Just simple stuff like that, but I dunno just the tone of the thing, with the owner not knowing what he's going to do now... lol he even spitballs that maybe he'll go on to become a music supervisor which is what I got my certification from UCLA for in 2019, and I didn't get a single interview after sending out a few hundred resumes... because no one wants us "old people" with our knowledge of essential music, they want the clueless kids fresh out of high school with their finger on the pulse of which Lil-whoever is saying "blllirp!" this week.
"I knew this store was going to close that day when that Grandma came in wanting to buy the new Taylor Swift for her Granddaughter... and we didn't have it."
And then yeah, you sound like a snob when you talk about music, make those "inside" references.
There's a kid in here who people tell to "start a music blog" and people used to tell me that all the time. I guess I kind of used to have one in the form of a Newsletter I sent out to the hundreds of musicians at Music Garage, the rehearsal space I ran in Chicago, but I never "critiqued" anything.
I was really a brat about music in my teens and early twenties, I really thought I knew more about music than anyone - and to be fair, I did know more about music than pretty much all of my peers... but then I moved to Chicago when I was 23 and a half and I learned - like getting punched in the face - that I knew nothing about music. I never even meant to move to Chicago but I was so blown away by what I discovered there I couldn't leave until I learned about all of it.
But I did. I learned about all of it. And then I sold all my records and left, and came to Echo Park, (which, for anyone who doesn't know, is a neighborhood in Los Angeles right next to Silver Lake where this was filmed, so every single storefront and venue they show is my neighborhood.)
And I always thought I'd have a life in music, and watching that record store owner, who's employees tease, "Tell us again how you saw Nirvana before Nevermind" - lol, I actually saw Nirvana - well, not "before" Nevermind, but the month that it blew up - like we actually had tickets to a smaller venue and they had to change the venue to a "big" place we'd never been (still smaller than the Echoplex) because they were surprised at the demand once Nevermind charted. (Honestly I always preferred Bleach and still do.)
But yeah, no one cares, I know, but I'll still tell that dumb story, and how Kurt passed out in the middle of the song and just laid that while the band kept playing, and my boyfriend and I were pressed against the high wall of the stage and were pretty much dry humping in the pit. God that was hot. That was the month he turned 18, in October 1991, when I was 18 and a half.
Yeah, I have no one to tell those stories to anymore. All my friends are young and I've learned to be polite about their tastes even though I'm always wistful of my Chicago friends and our inside winks. My friend Chris is still DJing that stuff and I still listen, my friend Deric will still text me when he's drinking and down a krautrock rabbit hole he knows only I would high five. And I think I'm the only person in LA who listens to shoegaze sometimes.
Yesterday I had all these plans to work on my script but I ended up just thinking randomly about a Triangle album I used to have and so I made a playlist of French music and then, you know, as long as I was at it, one of Portuguese and Spanish stuff.

Oh yeah, so I was gonna say, they would tell me to write a music blog, and in my life I had fantasies of opening a record store of my own, and even some kind of music school, like classes at the record store where you'd learn the lineage of all the branches of music you know...
but I know. I know that when you're deeply immersed in the scene you imagine that a lot more people know or care than really do about "underground" music. And of course, as they underscore in this film, times have changed, there is no more underground, the internet obliterated it and they even mock the guy who says that, selling him a terrible record and telling him it's rare...

A couple weeks ago in one of my rants on here I was saying how in the film we're gonna make I wanna bone a 18 year old when I'm 48 because I think men my age are afraid to dominate/don't think they can dominate a woman their own age so as part of my sex cult I'm going to teach the young boys how to do that as a way to encourage men my age to grow a pair and date women their own age...
But then after I fuck the teenager, of course I'll do one of the mockumentary scenes where I talk into the camera and grin, "of course, any man of any age can dominate me sexually if he's hot enough, but the reason men my age are intimidated is because they can't match me intellectually. I just wanted to fuck a teenager again."
And I'm such a fucking hipster gen X brat that yeah, yeah I think they date the young girls because they listen to Taylor Swift, and "All the Lils" as I call them. They will alway feel like Kings, like they have that knowledge over them. And that guy I was so sprung on, because he knew who Lync was, I haven't googled his name in months, or looked at his instagram or imdb or whatever... but I still find myself looking at his Spotify... judging him, (his worst fear), to be sure, mostly as a reminder to myself that he isn't who I imagined given he actually followed Phoebe Bridgers after that pathetic, clearly rehearsed, guitar smashing nonsense but also, you know, being amused that he just discovered Nurse With Wound, and then, despite myself, despite loathing him for choosing a chick who rocks Imagine Dragons over me, wishing I could tell him that none of NWW's best albums are even on Spotify and you really should hear Thunder Perfect Mind (which by the way is in conjunction with Current 93's same-titled album) and THIS ESSENTIAL Stereolab collab and the Second Pirate Session Rock'n Roll Station Special Edition puts the other to shame and God How Can You Stand Being With Someone Who Listens To Lizzo??? Is your ego THAT fucking fragile?!!
Yeah I know. Us music snobs are the Worst.

Hell it's 75 degrees and I'd meant to be out roller skating by now, but once I put this film on I just had to finish it and then ramble about it into the void because it really is a passion project and it's really sweet and if the guy who directed this film, Mark Tompkins, sees this review, well, high five man. I know you know your audience is out there for this and it certainly found a gal who even got a little misty at the end, because when that shop closed, I mean dang in the time of Covid when I would just kill to see a live show but everything is closed up... it's hard to not get the feels, and just also it makes me miss my Chicago scene friends, alive and dead, so many amazing shows and days gone by, so many crevasses of sound and jazz and magic nights...
The one bummer in this film is that because it's a clearly a shoestring budget the silence is deafening. I remember when High Fidelity was filming in my neighborhood. They used my friend Peat's house to film the apartment scenes in (he stayed with us), I made Lisa Bonet an avocado milkshake, I served Roseanne's daughter Thai food, and Tenacious D rocked the stage I worked on at the Double Door... halcyon days those! But yeah, what really made that film was the music that plays throughout, and there is virtually no music in this. I mean, it opens with Foxygen (who I saw open for Nick Cave, which was an odd choice, or wa that Lykke Li? I don't remember just that it was at the Ace Theater), anyway yeah and there's a Step-Panther song and a couple grazings of score (actually was cute, the score reminded me of Buffalo Tom and Jesus and Mary Chain to the point I am convinced it was intentional which I'm totally cool with) but yeah, every scene in the record store is in silence, which, of course, would never occur in a record store, so it's hard not to imagine what it would be like if only there was a budget for Can to be playing in the background.
Luckily, I believe the target audience will hear that music anyway.