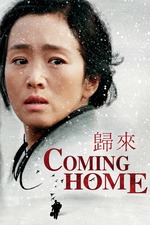 After a stretch of commercially acclaimed features, 5th Generation Chinese filmmaker Zhang Yimou refocuses on the humanist dramas which set him apart during the post-Cultural Revolution new-wave of Chinese filmmaking. A powerful, emotionally entrenched film about longing, devotion, and sorrow, Coming Home tells the story of a woman, struck with a unique form of amnesia, who is unable to recognize her husband after he returns from twenty years in prison.
Coming Home (Dir. Zhang Yimou)

Her lack of recognition is in no way a sign of disaffection; she simply recalls the face of a younger man. In early instances, Lu (Daoming Chen) attempts to recharge his wife’s memory by using objects, images, and sounds from the past to trigger a realization. In one scene, Lu plays a beautiful piano melody from their youth, and although it stirs her memories, Feng (Gong Li) is still unable to recognize the man as her husband.

When his attempts fail, Lu decides it is of no use, and so he finds new means to redeem closeness with her. He remains a dutiful husband by sacrificing his former life as her lover. Both husband and wife display a great deal of commitment and affection, as the wife patiently awaits her husband’s return while her husband attends her needs and stands by her side despite her lack of remembrance.

In perhaps her finest performance to date, Gong Li steals the show in her role as Feng. While showing an entire range of emotions, from sad longing to hope and joy to pain and malaise, she perfectly captures the mannerisms of a woman lost in thought. Her abrupt blank expressions aptly convey her deteriorated mental state. This in conjunction with Yimou’s masterful use of natural lighting, a feature he is known for, creates a deeply melancholy mood, bolstered furthermore by rain, snow, and a general wintery atmosphere of silence, longing, and sorrow.