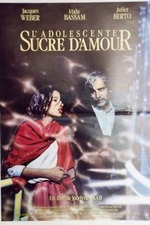 I get that making a movie in Lebanon in 1985 comes with its very peculiar production challenges, but still, casting a French actor in the role of the recluse Lebanese artist was a really bad call. The guy clearly cannot speak Arabic, which is very problematic when you play a character who refuses to leave his precarious situation because "these are my streets, this is my home etc". This is not really a problem for viewers who do not speak Arabic, and maybe that's precisely the point, and the real reason why this movie rubbed me the wrong way: This is a film made with a western audience in mind. Its treatment of the Lebanese war never develops beyond faux-poetic banalities of the "war is a surreal hellish nightmare" variety. We might as well be in Vietnam or Angola or whatever. This smacks of playing into an audience's facile preconceptions of "what it must be to live there", which kind of explains the incongruous "nascent sexuality of free-spirited girl trapped by oriental/Muslim oppression structure" theme. Ugh. Saab seems like a well-meaning person, but the two works of fiction I've seen from her are quite underwhelming. It was fun to see Juliet Berto hanging out in Beirut though.

May They Rest in Revolt (Figures of War)