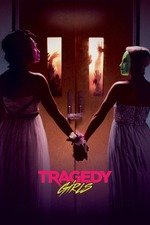 One thing that, I think, devides audiences when it comes to Tragedy Girls is the strong stylization. And it's not just the visuals, the very prominent soundtrack or the way violence is handled - it's also the acting. HIldebrand and Shipp both very deliberately overact throughout most of the movie, and Kevin Durand's character comes across as like a dog almost; I'm not sure you can even call that acting anymore. However, I thought it worked really well in the confines of the movie. I was also really pleased with the turns the story took - there's a certain scene where I'm sure almost every viewer will be glad with the direction MacIntyre took the film.

A wonderful mix of comedy, horror and satire, with just a sprinkle of social commentary, Tragedy Girls has already gained a cult following after its release last year, and if that sounds like it would be up your alley, go and watch it! This is definitely one of those movies where you should know as little as possible about it before watching. So, no trailers!