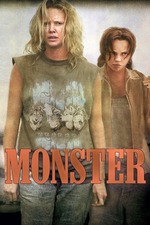 You sabotaged my ass, society!

The film itself has stock-standard TV sensibilities. The physical horrors of murder are modestly implied; the camera angles are arranged so that we don't ever see what is actually happening. That being said, the performances are so good that you might be misled into believing you've seen more than you actually have. Theron's guttural screams are so precise, the levels of her rage so permeable, that we feel the agony of a beating without being graphically assaulted by it. It's the kind of performance that defines a career and becomes the benchmark upon which we judge every other performance from that artist. It's so good - so exactly right - that it feels otherworldly, even preordained; as if it was always meant to exist just as it is, and that to change a single nuance would be to pull apart the whole thing.

Based on a true story, Monster retraces the life of Aileen Wuornos, a prostitute in Florida convicted of killing several men over 12 months between 1989-1990. She was sentenced to death in '92 and executed twelve years later. Wuornos has become an iconographic figure over the years and been the subject of two fascinating documentaries by Nick Broomfield. Like the documentaries, this film takes a sympathetic look at her life and crimes, which caused a degree of upset upon its release.

I don't know how I'd feel about the film had I known and cared about one of Wuornos' victims. Certainly there are scenes where she kills without provocation, but we accept her violations on the basis of the initial rape scene - which is so galvanising it recurs in our minds for the rest of the film. Theron's Wuornos is a hopeless drifter, a born loser. Her eyes move skittishly around in their sockets as she musters up the necessary adrenaline to pull out her gun. Director Patty Jenkins wants us to believe that Wuornos is not naturally predisposed to murder; that it was, in fact, a deadly combination of her miserable circumstances and warped pathology that turned her into a monster. In this sense, the title of the film is ironic. And yet it isn't, because her victims are seen briefly to be harmless men caught up in her net (one of them isn't even a client, merely a good Samaritan doing what he can to help someone less fortunate than himself).

Perhaps the film's detractors would've liked the director to have investigated the victims more closely, or to have humanised them with more screen time, but this would be problematic. This film doesn't have time to be about Wuornos AND her victims. It's about the predator, who is revealed to be a victim herself - not only of mental illness but of the police force, the work force, a sadistic rapist and a grasping, parasitic girlfriend for whom she will do anything. There's a narrowness in the writing that gives us the impression Wuornos' degeneration into a killer was inevitable. It has its eye set accusingly on a take-no-prisoners society that moulded her. Without making excuses for her brutality, it dares us to understand her, even care for her. The love story between Theron and Ricci is our way in; we invest in their relationship to the point that we're able to struggle through the carnage of Wuornos' rampage (which, incidentally, is the fuel that keeps them together). We grapple with Theron, the street-walker, the bread-winner, the idealist, the maniac - and hope for her. The film manipulates us into ignorance; her victims are sidelined in pursuit of her goals, which aren't lofty. She just wants a lover and a home and a tidy, respectable life with no hassles. Like all good antiheroes, her dreams seem to grow bigger the further she moves away from them. In this sense she is totally naive - and it's difficult not to root for someone who believes in a happy ending.

What Monster doesn't do is become cinematic. It's comprised mostly of static shots and conventional closeups. Had the film not been anchored by a truly arresting lead performance it would've been a wearisome ride indeed. Jenkins got lucky - her film is saved by her lucid screenplay and Theron's soaring talent. A beautifully rendered score embellishes the emotional impact, and Christina Ricci is perfectly cast as the sulking enabler with her head buried in the sand. Perhaps the film is better for not being more inventive with the camera. Theron's transformation is so complete and a thing of such fascination that to take any attention away from it would be a crime in and of itself.