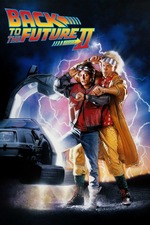 For most of the first film we were told "Don't mess with the time line" as it would lead to disastrous consequences. "What the hell" Doc tells Marty lying on the floor revealing the taped up letter. A bit of a turn around but it was a matter of life and death, so it kind of makes sense. Part II begins where the first one left off, Doc racing to pick up Marty and Jennifer to take them into the future.

Has someone died? Contracted a fatal disease? Spent all the budget for the third film? Well no, none of the above. Marty's son is going to jail. That's it. He makes a dumb decision but instead of learning from his own mistakes, or the future McFly's taking the blame, a DeLorean can fly in and patch it all up again. That's the entire premise for setting up this journey into the future. Surely even without the Almanac Marty could've placed bets that Nike would invent self tying shoes, there would be hoverboards and Jaws would release film number 19 in 2015. Just bet the McFly mortgage and clean up at the bookies. After the 30th or more time seeing this film you notice these things more and more but you know what? It really doesn't matter one bit.

There is something about the way the characters of Marty, Doc and Biff were written and flawlessly performed by the actors in the first film that allows us to forgive anything. Follow them anywhere. Even the third film which drags us into Doc's daft love story still gets a pass. Once we hit the skies, land in the alleyway and see Marty kitted out in that attire any thought of logic or plot is soon forgotten.

The overblown cartoon style future still remains a refreshing change from the endless grim dystopias that dominate sci-fi. Even though the second act ventures into darker territory once Marty returns home it remains completely caricatured. This is a classic comic book adventure hitting that sweet spot inbetween action, comedy and smart intelligent film making. The characters themselves are inflated further from the first film; Doc is more manic and wild-haired whilst Marty feels more than ready to deal with the curveballs bouncing his way.

If there is one complaint it would the absence of Crispin Glover. He was an equal to the three main characters in the first film and it is a shame they couldn't organise a story that managed to include him also. Some sort of sub-plot with older Biff may have been a possibility. Although there is a lot packed into this sequel so perhaps that is easier said than done.

With a cast so game to have fun with their characters that enthusiasm shines through, a major part of what makes this such an infectious trilogy. Throw in Alan Silvestri's legendary theme song and score (which incredibly only saw light of day as a stand alone piece 5 years ago) and you have a definitive 80's classic. A film with one eye on the future that has withstood the test of time and makes sure you keep going back.