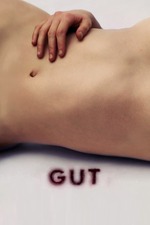 Gut hits you exactly where the title says so – smack bang right in the midriff. This unnerving low budget psychological horror, directed by Elias , details the breakdown of a friendship between two men that leads them into a very dark place.

Tom (Jason Vail) is married to Lily and father of young daughter Katie, holding down a good job and home where everything seems in place. Yet he doesn’t feel content, wandering if this is all there is to life or if he is missing out on something. He works with his lifelong friend Dan (Nicholas Wilder) who is still stuck back in his twenties, a little resentful that Tom has grown up to deal with his responsibilities.

Dan thinks he can bring them back together as close buddies once they see this new DVD he has ordered off the net, something edgier than the usual retro horrors they used to watch. It certainly does the trick as their bond strengthens in the shared knowledge of a sordid secret.

Gut walks the line between eroticism and violence, similar to how Cronenberg can sterilise your mind with his cold, clinical approach. Chvad SB lays down a very simple and highly effective score to create a sometimes nauseous atmosphere as the two friends struggle to remove the images from their thoughts.

This is a film that demonstrates the power of a perfectly pitched score, knowing when to pipe up and when to sit back and let the scene breathe. The thinking time given to the characters provides plenty of time for the music to ratchet up the tension. We wait as the characters do. Time ticks by under the weight of their angst at times not speaking for a few minutes, the camera focusing on their worrying late at night in bed or trying to get their heads straight.

It becomes hypnotic listening to the slow guitar licks between the slow breakdown of the friendship which is where that off kilter feeling comes from. That is where the strength of the film really lies by removing the dialogue and exposition usually created to map everything out. It leaves too much time for you own mind to start thinking of the worst, like part of their hidden pact.

Not everything is perfect of course, which is part and parcel of such a low budget affair. The acting is a little off in places – although the friends do make a believable pair – and Tom’s wife could’ve offered more than just hanging off his shoulder in every scene. The special effects do merit high praise looking very convincing and the DVD scenes are simple but wholly effective.

With its themes of sex, violence and friendships you may expect the traditional horrerotica approach where it all falls into the same sort of pattern come the end. Not here. Plenty is left hanging for you to come to your own conclusions and with Elias originally planning this as the first of a trilogy, home surgery may never be the same again.