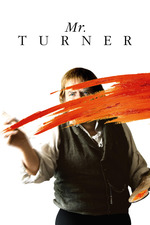 In hindsight Mike Leigh was the perfect man to bring William Turner's life story to the screen for the first time. Leigh has made a career out of focusing on these type of characters in their personal space, the eccentricities of British culture celebrated in everyday, muted fashion. Mr Turner is no different in that respect, keeping its focus small despite the larger than life scope with which the artist portrayed life through art.

This isn't necessarily a biopic about Britain's greatest painter, you could call it more of a character study or profile. It joins him as a middle-aged man already an acclaimed artist, living with his father and housekeeper. We learn next to nothing about his childhood or his strange relationship with the mother of his children both of whom he refuses to acknowledge. None of this hurts the understanding of the man in anyway because this is all about Spall's performance, pure and simple.

Within a few swipes of his paintbrush and a number of guttural growls Spall disappears under the wide sideburns, shaggy hair and dark top hat. He has great fun tackling the convoluted Dickensian language that enables the painter with a cockney accent to mingle with the upper crust of society. He turns Turner into an unstoppable force utterly committed to his work and mostly lauded for it. His insular lifestyle came across in work that concentrated on powerful landscapes where people were painted as tiny unimportant bystanders, if put into the picture at all that is.

Leigh shows Turner as having a contradictory attitude toward women, or perhaps only revealing himself to those who didn't demand too much in return. He outright refuses to contribute to the welfare of his children or their mother, yet finds affection with landlady Mrs Booth in Margate. Very little of the romance that blossoms in his paintings comes across in his personal life, although their coming together does show a softening and tenderness possibly not evident in his earlier life.

Being the first time Leigh has shot on digital film he takes full advantage of that fact with some beautifully enhanced post production shots. The opening scene finds Turner in the Netherlands scouring the horizon attempting to capture his moment, shadowed against a vibrant orange and yellow dusk. Later we view the sunset on Margate across the harbour and can imagine the glistening colours being cast across Turner's own canvass. Bar the infamous exchange with Constable, Leigh is wise enough not to throw his work in our faces and only uses them to enhance the character building done so skilfully by Spall.

As you would expect in a Leigh film there isn't a false note amongst the cast and whilst the plaudits and more will rightfully be given to Spall, Dorothy Atkinson's performance as Hannah Danby, Turner's long suffering housekeeper, deserves real praise too. Like all of Leigh's work this proves to be a humane and stripped down look at life. The contradictions that drove both man and artist to despair at the world around him, yet create such masterful visions of light are laid bare and it is a wonderful sight to behold.

The Trip to Italy