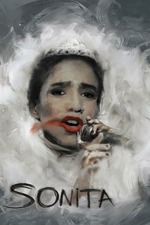 Coincidentally this fits in with the theme of the day, as the Women's Marches occur across the world. There aren't many stories of female teenage Afghan rappers on record and Sonita Alizadeh is a force of nature that definitely breaks that mould. It's an emotional story that completely changes course midway through for the filmmakers, shifting from a portrait of an Afghan immigrant in Iran faced with being sold for marriage, into a rescue mission.

The never ending cycle of abuse Afghan women face in order to pay dowry, which in turn enables their parents to 'buy' a wife for their male children, is seen not only through Sonita but the weary worn down acceptance of tradition in her elders. Sonita dreams of Michael Jackson and Rhianna, dropping rhymes to friends that reflect their own bleak situation, offering hope. Aside from waiting to be sold off by her visiting mother, the possibility of recording as a female artist in Iran is near on impossible. Another unexpected dimension to ponder are the longstanding ethics of documentary making, in taking a decision to stand back to record the unfiltered truth or becoming involved when your help could dramatically improve the shape of someone's life.