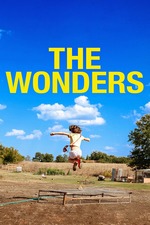 In the dead of night a group or some sort of commune arrive, searching the surrounding area for a place to rest. They come across what looks to be an unused, dilapidated house, their torches skimming across the crumbling brickwork. We then move inside where the lights seem to wake-up the building's ghosts from their slumber, a close knit family inherently connection to their land.

Time remains elusive in Alice Rohrwacher's Grand Prix winning film, a beguiling coming of age story that is rooted in the reality of familial responsibility and the enchantment of tradition. There is an established way of life out in farmers country, conventional methods that have sewn seeds of nostalgia defying change, despite the damage to past, present and future it can bring.

Twelve year old Gelsomina is the heir to her families bee-hive farm, built on a daily checklist of graft. She was raised from a child to work alongside her father to sustain their bee-keeping business, a burden she is unsure about carrying. Although tender in age she already takes on the spiritual responsibility of leading the family, the eldest of four girls and the right-hand (wo)man to a father who cares deeply for his family but lacks the emotional intelligence to display it.

There is no way to place when this story takes place and that helps to enhance the mythical air that lingers at the fringe of the narrative. The entire family at once feel tangibly real, as does the push and pull of the bonds that tie them together. Each one, even the much younger energetic girls, are allowed room enough to become an important cog in understanding the dynamics of Gelso's life.

There is little fuss about Rohrwacher's approach and it will no doubt be a film that divides people between those who connect with Maria Alexandra Lungu's captivating presence and others lost without a strong enough plot. Falling into the latter category would be a shame, because it remains thematically rich, exploring teenage, communal and political ideals with apparent ease.