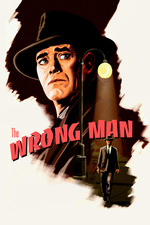 Truth is stranger than fiction at times and the story of Manny Balestrero is certainly that. The retelling of the real-life saga couldn't have fallen into more fitting hands than Hitchcock's who built an entire career off the back of placing the Everyman inside the most difficult of situations.

There is certainly a different feel to what is essentially a docudrama concentrating on the low level details of Manny's life. Instead of the typical Hitchcock tropes that build in carefully delayed moments of suspense the thrills are low key to make us aware of the effects the arrest has on his life. Whether it is his wife suffering her mental breakdown or viewing the jailing process through his eyes we are asked how we would feel in his shoes.

The introduction to the story is key to associating ourselves with this type of approach from Hitchcock. His distinctive slur tells us that this is all true immediately heightening our emotional connection with the characters, subliminally finding ways to integrate ourselves into handling such an absurd dilemma. The world around him is painted in dark tones where his family are the only ones he can rely on, the police and the victims only interested in seeing a conviction.

Everything is presented with very little fanfare to match the stripping of Manny's dignity. Fonda puts on his usual all American although with a bit more bite to him this time. His tall lean size is used to impose on those who accuse of him of the crimes, for example when we watch him from the other side of the bank tellers counter. A gritty atmosphere is anchored to our time spent in police stations, prions and mental homes adding to the authenticity of this being true.

Amongst the many more exciting Hitchcock classics this probably sits somewhere near the bottom of many peoples lists. Different as it is to his more sensationalist style the film is no less engrossing, proving to be grounded refreshing change. The lack of catharsis at the end is perhaps the biggest surprise of all. It feels like a return to his smaller films away from the hubbub, where life is just as messy and without justice.