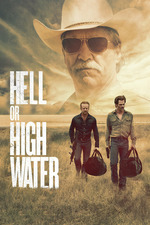 Watched for my office film club, "Heist movies" theme, and honestly I don't think I ever would have stumbled across this film otherwise - but I'm so glad I did!

I don't know what it is about the poster or synopsis, but I went into this expecting something pretty stuffy and pretentious/melodramatic. In reality this is just a really solid, very well made and at times very entertaining (even funny in parts) slice of modern Americana, elevated by a good script and some excellent performances delivered by a very likeable cast.

Ben Foster is having an insanely good time as the off-the-rails-loveable-lunatic and my man-crush affection for Chris Pine is further cemented from his turn as the smart but sensitive soul younger brother. Most importantly though is the fantastic chemistry that the two have between them, which is both charming and completely convincing. Speaking of convincing, a special mention has to go to the supporting actors and even bit parts and extras - Texas culture plays a really important role in the story, and in parts I was convinced they just used regular folks off the street as the townsfolk (the old dudes in the diner were almost jarringly 'authentic' lol).

I'm in a distinct minority when it comes to No Country For Old Men, which I just really dislike and find almost obnoxiously un-enjoyable. Hell or High Water is much more my speed, and manages to revolve around a lot of the same themes without being a total drag. Not sure that does my movie credentials any favours, but what the hell, give me Jeff Bridges as a wisecracking Texan Sherriff over Tommy Lee Jones same old schtick any day.

This probably isn't going to go down in anyone's book as an all-time classic or a cinematic masterpiece, but I really appreciated how consistently decent it was and would happily recommend it to anyone that hasn't seen it or heard of it before.