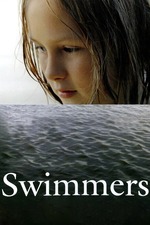 I saw this Sundance finalist when I was 12 or 13, through Netflix’s DVD-by-Mail service. Sarah Paulson acts as a lead and in middle school I had quite the thing for her. Paulson’s about 29 here. Still talking with a slight lisp, but it’s mostly outgrown. She’s pale and thin and kohl-eyed, radiating this depressing, pensive energy. The film’s setting—a Chesapeake fishing town in the early 2000s—and its motifs—marine life, east coast beaches, lane swimming—also intrigued me as these are things I vividly remember from my childhood.

Swimmers comes across as an American Ken Loach film, in that it is a sincere look into the lives of middle class families, who are portrayed by a cast of equally ordinary-looking, informally trained actors. This rings especially true for Tara Devon Gallagher, who stars as Emma:

Although Gallagher never had an acting class before – much less ever acted, she beat out hundreds of other preteens from New York, Los Angeles and Maryland. Producers said that they were blown away in her initial audition when they asked her to improvise a line of dialog in the script. Sadler says, "it was clear she was seeing and experiencing those things in her mind's eye."

It also reminds of Céline Sciamma’s works. Swimmers centers around two main characters—an 11 year old girl, and a twenty-something woman—who confide their troubles in each other. It’s an uncommon, but touching dynamic that speaks to being female at both ages. Swimmers presents the struggles of an adolescent girl as respectfully as it does those of a mentally ill young woman. Sometimes they share the same struggles.

Neither melodramatic or unrealistically optimistic, this film draws the viewer into what feels like real lives. You are truly a voyeur, eavesdropping on something completely authentic and unattached from the meta of filmmaking.

With some movies I love, the appeal is fantasy; being immersed in a space where people this beautiful, personalities this large, romances this enthralling can’t otherwise exist. Then there are films whose verisimilitude shake you to your core. And you leave the theater or turn off the television with this gaping hole in your heart, because that movie shattered whatever wall that was disassociating you from feeling a certain, inexplicable emotion. When I think about Swimmers (even after 7 years), this is what comes to mind.