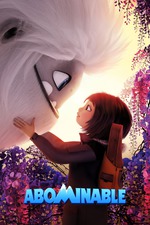 The cutest damn yeti to ever grace cinema. He's probably the film's biggest draw, but that would diminish how the animation is absolutely stunning. It truly lets you dive into the landscapes all over Shanghai. One of my biggest pet peeves is when celebrities' voice-overs are too obvious and you can't see the character beyond envisioning the celebrity. But all of the voices here are marvelous - Chloe Bennett, Albert Tsai, Tenzing Norgay Trainor, Eddie Izzard or Sarah Paulson pulling an American Horror Story: Roanoke feat by switching between British and American-English. And, I appreciated that even though it's a "kid's film", the characters are well-rounded, especially the heroine, and that it skips over her having a romance. The story is a little cliche with too many "fake-outs" towards the ending, but it was nice to not get enveloped into Pixar's increasingly contrived messages and themes. It's "just" a movie about kids going on an adventure and discovering why they feel so emotionally lost at home, but it's also not just that. Yi's worthy of being a Disney princess, honestly. But that damn yeti. I want one.