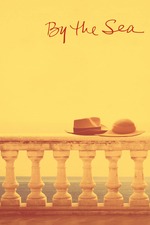 If this was shot in 1950s black and white via Italian cinema, it would be a marveled masterpiece today. However, I have to call Jolie out on the fact that her pacing is terribly mismanaged and characterization is droll. Too much of the plot goes in the opposite direction towards Who's Afraid of Virginia Woolf? excluding the feverish monologues and fragile tempestuous chemistry between the couples. That films acts on a tightrope where everything is bound to explode. Without that, you get Google's first automatic question about this: What's wrong with Vanessa?...which is more appropriate title given that Jolie's Vanessa and Pitt's Roland marital issues pushes and pulls them apart for an unexplained reason until the second hour mark. By then, that's a hell of a long time to be watching Brangelina sitting around peeping on another couple having sex and wishing it were them....and also to realize that Jolie was not quite good in this as much as Pitt is. Whether she was too aware of her presence as a director or maybe this hit too close to home for both of them, she comes across as lifeless - and not in an enigmatic or intriguing way, more of a doe-eyed, don't know what the story is about kind-of-a-way....while Pitt's left to keep digging to the root of her issues and help her along. There is something buried underneath the surface of a woman's reproductive rights being the sole asset of a woman's worth, but it just feels aimless and meandering due to Jolie's performance. Part of me felt that their marriage counselor told them this would be a good way to work out their problems. But unlike Mr and Mrs Smith that saw them happily start an affair (and sex being the answer to their intimacy issues...I'm sensing a theme here), this should've stayed in the vault or used in the divorce litigation.

And, she did Melanie Laurent dirty too - relegating her out of a masterful performance in Inglorious Basterds to a personality-less sex kitten...SMH.