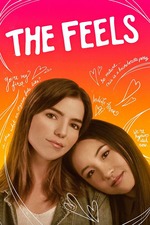 I thought Happiest Season was bad... But this is just wrong on so many levels.

The plot's jumping off point is that one half of an engaged lesbian couple has never had an orgasm with her partner. But addressing it in an emotional way is swept under the rug.

The script implores "improvising", but most of the scenes lag and don't offer any real depth or laughs (except for Ever Mainard as Regular Helen, god bless her), and stray off-course without getting back to the emotional crux of the story. It seems to be used as a way to make it seem like the topic is being explored in-depth more than it actually is. Because after Angela Trimbur 's Lu makes this revelation about herself and this relationship, there's such a lack of communication or empathy, it's shocking the longer the movie goes on how it's treated with equal parts shame and "we'll fix it eventually mentality". It's more emotionally abusive relationship than anything else and does not warrant a wrapped up happily-ever-after at all.

It's also horribly, almost offensively, ironic that director Jenée LaMarque seemed to want to make a film about "female sexuality without a male in the narrative" - but herself and most of the cast identify as straight. That's important because that perspective still takes precedence in how the queer story is told so haphazardly and that the subplot of two straight characters (one of them a male and a dickwad) takes up more space than they should. Interspersed with the main plot are vignettes of the characters talking about their past sexual experiences, but it doesn't really add insight to Lu's own feelings about why she struggles with intimacy - there's too much of a strong attempt in trying to equate LGBTQ+ identification with straight struggles without unpacking it hardly at all... it lacks so much nuance, it could've centered around a straight couple and probably remained the 95% of the same.

So disappointing - I just wanted a nice fun little queer movie to watch since I'm sick as a dog right now and not in the mood to cry to Carol or Portrait. In short, we gotta get heteros out of telling LGBTQ+ stories, get our voice heard, burn down the place to get in, something - because yikes.