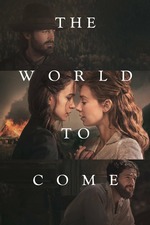 I knew I was in trouble when the opening frame was a long-ass pan of trees coming into focus like I was suddenly watching Ron's perspective when he got splinched in Harry Potter and the Deathly Hallows Part 1. But then the tedious plot began basically reading like Tragic Lesbian Love Stories 101 with a child's death, abusive husbands that treat *their women* like cattle, muted color tones to match the misery of a crippling winter, sad narration. Everything about this film screamed to me - don't get attached. But if you're living out in the middle of nowhere married to Casey Affleck, and the only other woman who comes along is Goddess Vanessa Kirby (OMG with flowing red hair!!!) who looks at you like you're the only person in existence and every conversation with her is like "sigh* men, do we really need them?"...would you not go for it? I KNOW I'D volunteer as tribute.

The anguish and passion with what these characters felt, and only had each other to fulfill a semblance of happiness, is actually expressed really well with Kirby, Waterston, and the dialogue I was kind of surprised. But it was not lost on me that this was going to be another version of Hollywood's idea of a lesbian - "straight white married women who all of a sudden have gaydar and turn to each other"...but G'damn, I was utterly attached until the third act - where Kirby and her husband move away, Waterston plans a whole rescue mission, but she's too late and Kirby's been killed. At least Ammonite without the chemistry or good script ended on an ambiguous note. The time period didn't just seem to be used as another way to lure queer audiences into another unrequited romance, but also let critics (even LGBTQ+ ones) get away with saying the time period justified killing gay women because this is what happened back then. As a queer person, I was just super exhausted and disappointed by the ending - even though I expected it. I don't really know how many stars to give this one.