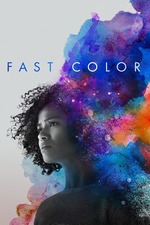 I think, in some ways, part of the reason I've always enjoyed the supernatural, the superhero, or just the fantastic is that when you grow up just a little too fat and a little too afraid of taking up space, you're drawn to the things that show people also like you that have power that makes them different, that makes them better, and that gives them strength. I always wanted powers and Fast Color illustrates what it's like to have power, not just as a superhero but as a Black woman, but to have to constantly tamp it down. To hide your color, your power, for your safety and the safety of those around you.

It's so beautifully shot, and honestly, better to me in the moments without dialogue. The dialogue feels like it's trying too hard sometimes - going too big and too cliche when it should stay in its intimacy. These three generations of women have powers that literally shift the Earth, but Fast Color is better when it focuses on a bowl, a family diary, and the turning over of an engine. It teases at the larger questions of their powers and the effects its had on the women of their family - so hidden from the world, but the writing shies away from taking this deeper. I think if we spent a little bit less time seeing Ruth on her own early on, we'd have more time to really feel the full, devastating effect of the ending, which is so emotional, and the pacing would feel faster at times.

But I'll never forget being able to see Black women doing literal magic and shaking the Earth. Even if I don't have powers, Fast Color made me feel like I could see the colors too.