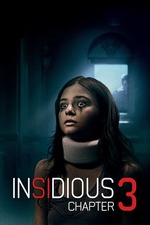 Of course, movies like this can never be done without that prequel somewhere in the mix.

I was confused at first because if you don’t watch these movies back to back, you probably would’ve definitely forgotten about the teaser at the end of the 2nd film. I was waiting for this movie to be about Allison, but alas, this was a prequel.

I was convinced the “man who couldn’t breathe” was actually just the mother’s lung cancer form, but I was mistaken. Maybe that was the intention?

Can we all just take a minute to appreciate Leigh Whannell’s writing and direction on this one? I know him and Wan are friends and work together a lot, but Whannell knows how to keep the series similar to Wan and even include him in the story (no matter how brief).

I love that Leigh references being a writer in this by having his character be a “writer”. I also love that he makes his character so nerdy, and gives himself these awesome one liners.

Without knowing there was another installment, this would’ve been a great ending to tie everything up to lead into the first film.

I also didn’t know that horror movies could make you cry. The story about Quinn and her mother wrapping up at the end made me tear up...

I suppose I’ll have to finish up watching this series tonight and find out what’s going on with Allison!