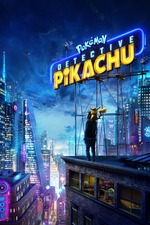 2019 Ranked: Here
Pokémon Movies Ranked: Here
Summer 100: Here
I AM A HUGE POKÉMON FAN. I have seen every episode of the anime up until Black and White. Have played both all 8 Pokémon regions + the actual Detective Pikachu video game, bought a Pikachu Plush in the Nintendo New York store, and I play TCG (Trading card game) and VG (Video game) competitively. So it disappoints me to say I did not like this movie. I had Detective Pikachu high on my 2019 anticipation list for those of you that saw it, so it may be due to Over-Hype but I just was not feeling the film.

The movie had a few hits and a lot of misses, from the CGI to the acting. One all the acting is just meh no one really stood out and if they did it was because I did not like there performances, like Kathryn Newton who plays Blonde chick with Psyduck (Fun fact this is the third critically acclaimed Kathryn Newton movie I did not like: Detective Pikachu, The Maid, and 🦃 Blockers) was just a little bit too anime, so much so that I was starting to get a Dragonball Evolution vibe from her. Then the movie is so predictable, the minute I saw Bill Nightly (The really old guy) I already knew how this movie was going to end (kinda). The pacing is so so bad, the first act was just went way too fast so we never really got a chance to explore these placesI feel would have definitely benifited from an additional 20 minutes; we where in one place then the next and then the next but this also is kinda a pro as well because there is some phenomenal world building there especially since there was not much source material since Rhyme City has only been in one video game being Detective Pikachu. The CGI was good for the most part, it felt like they tried on some Pokémon (Pikachu and Psyduck) but on others just horrendous (Mewtwo and Ditto (I can not stress enough how bad Ditto looked)). I HATED MEWTWO one of my favorite Pokémon was just turned into a plot device, watch the first Pokémon movie Mewtwo Strikes Back then watch Detective Pikachu and tell me which is better.

Finally, I think they actually could have gone bigger, a lot of the movie and some of the references were already going over casually audiences heads. Out of the 800+ Pokémon, there was probably 200 if not less shown and they could have included things shown in the anime and video games like fusion, ranger catches, Mega Evolution, and maybe even Z moves. Of course I understand why they could not do this because only Super Pokémon fans would have understood but it would have been cool to see, especially since at least 30% - 50% of theater walked out being very confused.

My heart wants to give it a positive score but the critic side of me knows what I need to do. So... Verdict 6.0/10
You want to know what is funny this probably the best video game movie I have seen and it is barely fresh.