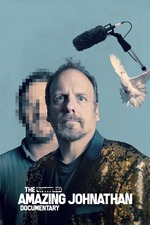 WHICH MEANS WE ARE GETTING 4 DIFFERENT AMAZING JOHNATHAN DOCS THRIS YEAR??? And all of them are from different people?!?!?!?

So I know nothing about this magician guy and I did not learn much except he had a serious illness and is somehow still alive, also he does like 8 times the amount of drugs of Elton John soooooo... yeah this really a documentary of how paranoid this the director is of releasing a documentary that a billion other people are doing this year.

So this becomes the question should I rate this film based on how good it is? BECAUSE IT IS REALLY DAMN GOOD...
Or
Do I rate this doc on how much information I learned about The Amazing Johnathan??? BECAUSE IF WE ARE TALKING LIKE THAT I WOULD PROBABLY GIVE IT LIKE 1 and 1/2 stars.

In fact at some points in this documentary the question the validity of his illness and if this whole time he has just been pranking them the entire time. I won’t spoil the ending of the film, but I am truly considering watching the other documentary “Always Amazing” and see if they add anything else to this incredibly weird story as I am truly intrigued about there people involved in this film but especially Simon Chinn.

In conclusion, WOW if this is not the most interesting documentary I have seen in a while. Totally bonkers and very convuluted, and though Johnathan is not the primary focus it did leave me wanting to know more know about his life.