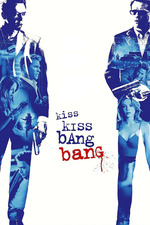 After recovering from the surprisingly average experience that was Iron Man 3, I decided to go back & watch Shane Black's true masterpiece, Kiss Kiss Bang Bang.

Ah, there's something magical about this film...Perhaps it's the pace, perhaps it's the groovy visual style or perhaps it's just Gay Perry. Every time I watch this film, there's a new joke I discover, laugh at & then use 20 times on people for a week (upon this viewing it was Harry's Drew Barrymore joke).

Whilst I still have problems following the incredibly complex plot, I would take this over Iron Man 3 any day. The writing is astoundingly witty & hilarious with surprising humour & even more surprising performances, I mean...c'mon, nobody looked at Val Kilmer the same way again after this, it turns out that this guy's got talent up the wazoo! & he also has a small gun in his balls.

Ahhh...Kiss Kiss Bang Bang, you are the reason I began loving films like In Bruges & Layer Cake. Witty & self-aware crime/comedies have a nice effect on me.