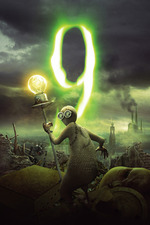 We’re dropped into the world of 9 much like its titular character is: with little sense of where we are and without the words, at first, to describe it. There’s nothing but desolation and ruin all around—the kind of junkyard postapocalypse so beloved of speculative fantasy. What keeps our attention is 9 (Wood) himself: He’s a slightly hunchbacked stitch doll with a zippered burlap body and minibinoculars for eyes. It’s not until he meets fellow stitch man 2 (Landau) that he gains the ability to speak and learns that he is one of the last living creatures on Earth, which has been all but destroyed by sentient war machines.

Sobering stuff for an animated movie that pitches itself somewhere between cutesy children’s entertainment and hectoring Grimm’s fairy tale. The problem with 9, though, is that it lacks a consistent tone. This lovingly detailed world feels disconnected from the concerns it raises, especially in the ways the film scrubs any sense of horror from the deaths of billions and the devastation of the planet.

Writer-director Shane Acker is more out to prove his mastery of animation technique. Save the voice work, which is celebrity-heavy and mostly undistinguished, 9 is a marvel to take in, especially the individual character designs. Most memorable among the stitch people are 3 and 4, who have memorized all the books in a collapsing library and relay the information by projecting it as a scratchy black-and-white film. But Acker’s finest creation is the Seamstress, a villainous, snakelike creature—made up of tattered fabrics, half a doll’s face and six spindly mechanical pincers—who bedevils the film’s heroes in ways that would make Clive Barker (a clear influence) grab protectively at his guts.—Keith Uhlich