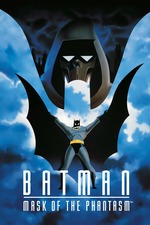 I was watching "Ren and Stimpy" on Nickelodeon on an August evening. It was time for a commercial and I was just about to go to the kitchen to get a snack when I heard an announcer say, "COMING TO FOX 5 THIS FALL, BATMAN!" Danny Elfman's haunting score came up over the speakers so I sat and watched the commercial. When it was over thirty seconds later, I thought to myself, "It's probably one of those badly animated, unimaginative Saturday morning cartoons."

Two weeks later I was reading Entertainment Weekly's and People magazine's TV review sections. They were, of course, reviewing Batman. I was expecting them to give it a grade of C or below, but to my surprise they gave Batman grades of A and A-, respectively. I became curious about the show and was home on the day it premiered. The debut episode putted Batman against Catwoman and the female terrorist Red Claw.

Batman has been drawn as a dark and mean character with a V-shaped body and narrow eyes. Helping him fight crime is his faithful butler Alfred, his newly redesigned Batmobile and all of his gadgets. My favorite toy is the Bat-Plane.

The animation is noteworthy. Finally we have a cartoon in which the characters seem to move instead of just standing around blinking and talking like they are in a dubbed Japanese movie. The backdrop of Gotham City conjures the Art Deco style of the 1920's and adds to the show's already eerie quality.

While most cartoons would just give us characters we know nothing about, Batman takes the time to show us their past and how they turned out to be the way they are. On a recent show, the enemy was Mr. Freeze, a man who needs to live in a subzero environment to survive. Instead of just telling us how he came to be this way, Batman watches a videotape of the day the man became Mr. Freeze.

Mr. Freeze was a normal scientist working on the process of cryogenics, and was testing on his wife, who had an incurable illness. While trying to freeze his wife, Mr. Freeze is knocked into a vat of liquid nitrogen by a company bigwig. Now he is bent on revenge.

The dialogue is funny and witty. On a recent show Batman caught a cold and insisted on fighting. Alfred handed him a container saying, "You'll need this sir." Batman replied, "What's this, a smoke bomb?" "No, chicken soup, the only way to fight a cold."

Congratulations to Fox 5 on accepting Batman into their schedule. If you haven't seen Batman, check it out a few times. It's on Monday through Friday at 4:30pm.