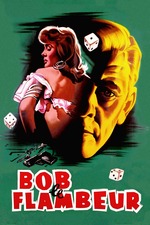 Timing is everything. Rialto Pictures is doing connoisseurs of cinema a great service by releasing Jean-Pierre Melville’s Bob le Flambeur, playing at Film Forum from July 27 – August 9, in a new 35mm print with newly translated subtitles. From Jean-Luc Godard’s Breathless to Frank Oz’s recent The Score, Bob’s influence on the tried and true stories of thieves, cops, and heists ranges ad infinitum. But don’t let that historical pedigree dissuade you. Bob is light on its feet and free of the pretense that plagues so many of today’s films, precisely because it does not aspire towards unearned mythic proportions. Bob’s overall effect can be summed up by the f-word that most films of today’s cops ‘n’ robbers genre have apparently forgotten: Fun.

Robert Montagne (Roger Duchesne) is a compulsive gambler, former hood, and “le Flambeur” (“high roller”). He walks the streets of Montmartre nightly searching out card games, roulette tables, and slot machines—his livelihood. Bob has hit a bad streak, and it prompts him to attempt a heist on a casino, a three million-dollar payday. He enlists the aid of his protégé Paulo (Daniel Cauchy) and good buddy Roger (Andre Garet) along with a crack team of thieves who, seemingly, can pull off the heist without a hitch. Complications arise, not only among the thieves, but also in the form of Anne (Isabelle Corey), a young girl in the big city whom Paulo falls for. In a subplot that feeds into the main plot, Marc (Gerard Buhr), a low-level hood with connections to Robert, owes the local police lieutenant, as well as Robert’s friend, Ledru (Guy Decomble), a favor after being brought in on a misdemeanor charge. When he hears about the planned heist, Marc sees it as his way to clear his police record. What once seemed a fairly straightforward plan turns into a near-complicated mess, with a final twist of fate determining the outcome of the heist and the final destinations of the characters.

The enjoyment that the story of Bob le Flambeur inspires is easily deceptive, because it seems so simple. As stated, there is almost none of the pretense—we might go so far as to say cynicism—that pervades those movies of today that analyze Bob’s theme of honor among thieves. As much as I like Michael Mann’s Heat, for example, the whole enterprise was bloated by the weight of its stars. (To those expecting a Brando joke, sorry, I haven’t seen The Score.) Bob le Flambeur doesn’t carry nearly so much weight and the performances here feel right on in every respect.

Director of photography Henri Decae, soon to work with Malle, Chabrol, and Truffaut, lends memorable support to Bob’s surface, always suggesting with his camera placements the delight and the danger of the Montmartre gambling underworld. When Robert considers his reflection in a storefront window, declaring he has, “a hood’s face,” Decae’s under-and-tilted placement of the camera conveys nostalgia, regret, and repressed violence, a perfect complement to Duchesne’s stoic expression and time-worn face.

As with most successful films, there is much going on beneath Bob’s jaunty surface. Only a few years before Bob, Melville teamed with Jean Cocteau to film the latter’s novel Les Enfants Terribles. The result was a dark, tragicomic exploration of a brother/sister relationship, an ever-spiraling descent into a psychological hell contrasted with the characters’ earthly success. However much is Melville and however much is Cocteau is debatable, but it no doubt prepared the novice director for Bob’s similar journey, though this time with a distinctly different tone. Bob established Melville's increasingly self-contained world of hoods and molls—it inaugurated the French New Wave, destroying the "tradition of quality" in Gallic '50s cinema that Truffaut and his cohorts railed against.

As we watch Robert Montagne navigate his way through Melville’s first original story, it is obvious that the end result will be one spiked with tragedy and unforeseen occurrences. Anchored by Duchesne’s performance, which mixes sexiness, gruffness, empathy, and sadness into a believable whole, Bob le Flambeur finally looks on the bright side of life. Its final shot of an unoccupied car sitting next to a sunrise-bathed beach is as powerful and hopeful a suggestion of the afterlife as cinema has given us—in this case, a casino where your number always comes up.