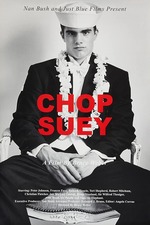 Chop Suey is a mildly diverting collage movie from photographer/director Bruce Weber. It switches its focus from one subject to the next in an attempt at creating a cohesive universe of disparate characters. The major three are Peter Johnson, an obscenely attractive male wrestler, Frances Faye, a musician, lesbian, and gay community cult icon, and Weber himself, whose voiceover connects the threads. It’s being advertised as a film, though it looks like a video blow-up to 35mm. It finally reveals very little about the people involved, instead separating them into an impenetrable and arrogant world that is Weber’s alone to exploit. I have to admit that Chop Suey’s slightness was only more apparent since I had just come from David Lynch’s Mulholland Drive. More on that masterwork, and its hopefully long reaching effects, next week.