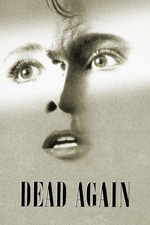 Dead Again is an homage to old Hitchcock films like Rebecca. It uses many of his techniques and imagery, but it's not a ripoff. It's a fresh idea for a film.

Two present day people are linked to a couple that lived more than forty years ago, Roman and Margaret Strauss. They are now an unknown woman and an LA detective named Mike Church. Roman had been found guilty of murdering his wife with a pair of antique scissors and was executed in the electric chair.

Kenneth Branagh and his wife Emma Thompson play two parts. As Roman, Branagh dons a short beard and mustache and actually acts like a serious composer, one that might live in the forties. As Mike Church, he has all the qualities of the average joe. He is a clumsy, unsure person and is always doing something funny. Reportedly he had to learn how to talk in an American accent by going into grocery stores.

Emma Thompson plays Margaret Strauss and the unknown woman who Branagh nicknames Grace. As Margaret, she plays the rich and pampered woman of the '40s. As Grace, she is a very disturbed woman.

Derek Jacobi is the hypnotist who tries to help him. He is an antique freak and whenever he puts someone in a trance he always makes them describe any antiques they see. In one scene, he makes a woman descended from Teddy Roosevelt describe the old oval office.

Andy Garcia plays the reporter who pushes Roman to murder his wife. Garcia is good as the reporter. He has the investigative quality of a young man who always wants stories to go his way. The only scene in which he is in the present is in the rest home where Mike goes to see him. This scene is one of the most hilarious in the film. I would like to have seen more of Garcia.

The rest of the supporting cast is good, also. I especially liked Robin Williams who puts in a terrific cameo as a former psychologist now working in a Spanish grocery store. He always has some strange but very funny answer to everyone's questions.

This movie was my favorite of the summer. It's great to have a movie that has the qualities of the old mystery whodunit movies of the forties mixed with adventure and a love story. So if you have some free time, definitely see this film. It's movie-making at its best.