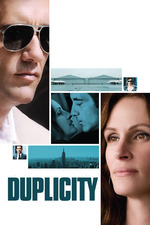 For Duplicity, writer-director Tony Gilroy drops the pretense that marred his previous effort, the dreary corporate-greed parable Michael Clayton. He lets his stars, Owen and Roberts, be stars, as opposed to puffed-up symbolic vehicles projecting depths they don’t contain. George Clooney couldn’t carry the silent extended take that ended Clayton—profundity was forced on him and he shot back vacuity. Owen and Roberts have no such problems with this much more lightweight offering, a sort of Thomas Crown Affair triple cross as filtered through a comic-existentialist prism.

More than once, Gilroy evokes the long-shot ennui that characterized many a 1960s art film—the final image, in particular, is a deadpan hilarious coffin-closer straight out of Samuel Beckett. Yet such comparisons belie the movie’s overall airiness and its frequently sun-dappled sensuality. When Owen plants postcoital kisses on Robert’s back in a spacious hotel suite, it seems only right to swoon along with them: the Hollywood con game, perfectly played. The corrupt corporate backdrop also bears more fruit here than in Clayton because Gilroy treats it as a farcical counterpoint to the romantic interludes. The slo-mo opening-credits introduction of dueling CEOs, played by Tom Wilkinson and Paul Giamatti, is especially notable, like a political cartoon come to life, complete with mislaid punches and Looney Tunes pratfalls.

As long as he’s being superficial, Gilroy proves his artistry. It’s only when he steps outside the role of pleasure provider that his workmanlike efforts begin to crumple. Duplicity does indeed bend and buckle under the weight of many a final-reel revelation, though it never entirely collapses. (Opens Fri.)—Keith Uhlich