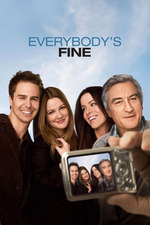 Robert De Niro stars as everyfather Frank, a remote, widowed retiree who embarks on a cross-country journey to visit his four estranged children. There’s some small pleasure in watching one of the great screen performers play such a recognizably fragile type, though De Niro and writer-director Kirk Jones shamelessly milk the situation for sentiment.

In their defense, this problem is inherent to the material: Jones based his screenplay on Italian schmaltzmeister Guiseppe Tornatore’s Everybody’s Fine (1990), which starred Marcello Mastroianni as the lonely elder. For the Hollywoodized version, the character’s occupation has been changed from bureaucrat to telephone-line worker — the better for him to offer facile commentary to family and strangers alike on our culture of noncommunication.

As Frank crisscrosses the nation, Jones offers picture-postcard shots of the American landscape, though the digitally shot production, with its ugly colors and flattened depth-of-field, more often resembles an amateur home movie. The film attempts to build a mystery out of several phone calls shared among three of the four children (Beckinsale, Rockwell, Barrymore) — their brother, a tortured artist, is on a bender in Mexico — though it quickly becomes clear that this is a cheap way to unite the family in unearned grief.

Nothing feels authentic in Everybody’s Fine — not Frank’s patronizing internal conversations with his kids’ younger selves, and certainly none of the people who he meets on his journey. Even great character actors like Melissa Leo (as a confidently sexy trucker) and Brendan Sexton III (as a train station beggar) are stifled by all the pseudo-redemptive mush.—Keith Uhlich