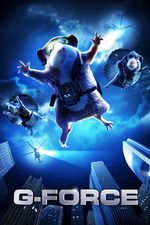 Guinea pigs and Zach Galifianakis? Could this be a test run for the as-yet-unscripted Hangover sequel? Certainly watching the Jerry Bruckheimer–produced G-Force is akin to a migraine-heavy morning after. It seems there’s this undercover team of intelligent squeakers (voiced by Sam Rockwell, Penélope Cruz and Tracy Morgan) who’ve been called upon by the PG-neutered host of the Between Two Ferns web series to infiltrate the lair of a corporate baddie (Nighy). Nefarious shenanigans are uncovered, but what’s this? A stone-cold FBI man (Arnett) is shutting the operation down, dog!

Off the rodents go to the local pet store, where they room with a hyperactive Canadian hamster-ferret (voiced by Steve Buscemi) and another G-pig (voiced by Jon Favreau) who quotes Lieutenant Colonel Kilgore after unleashing a napalm-scented fart. But there’s a world to save and rides to pimp, as Morgan’s race-specific cavy might say. What does a tricked-out espresso maker have to do with it? Might a tech-savvy mole (voiced by Nicolas Cage) actually be a mole? Was this film really scripted by some Seussian monstrosities credited only as “The Wibberleys”?