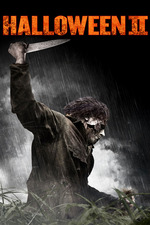 [Author’s Note: This is my review of the compromised theatrical cut of Halloween II. The director’s cut, more widely available on home video, is, by contrast, a great film.]

Rob Zombie goes out of his way to differentiate the second film in his rebooted Halloween series from the first. This is most noticeable in the grubby, grainy 16mm visuals that act as a squalid conduit to the headspace of Laurie Strode (Taylor-Compton), sister of seemingly indestructible psychopath Michael Myers (Mane). Now living with Sheriff Lee Brackett (Brad Dourif) and his daughter Annie (Danielle Harris), Laurie has no inkling of her lineage outside of the subconscious: She’s tortured primarily in dreams, and Zombie opens with a doozy of one that pays explicit homage to the original Halloween II while bettering it in just about every respect.

When his heroine wakes up in the real world, however, the writer-director starts losing his footing. Laurie’s story holds interest due to Taylor-Compton’s intense, nontrivializing dedication to the role, especially when the character’s feral brother comes calling. But a side plot involving Michael’s former psychiatrist Sam Loomis (McDowell), now an egocentric celebrity author, weighs down the proceedings with limp satire of our media-addled age. Zombie remains committed to showing how violence lingers with, and perverts, all who are touched by it, yet his carnivalesque approach often undercuts his very real empathy. He panders to the cheap seats whenever he’s not being scary. (Opens Fri.)—Keith Uhlich