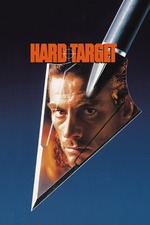 Over the opening credits, a violent killing unfolds. A man is being chased through the streets of New Orleans by a group of pursuers. They have guns and other assorted weapons that would scare the Terminator half to death. Needless to say, the man is killed, after having about three or four arrows shot into him, and thus begins Hard Target, an unbelievable, but terrific action film that is also one of the year's best.

The plot, for what it's worth, reveals that the man who was killed is homeless. Despite this, he has kept in touch with his daughter, played by Yancy Butler, who has come down to New Orleans to find him since his regular letters have mysteriously stopped. After the police refuse to cooperate, she acquires the help of Chance, played by Jean-Claude Can Damme, a veteran of war who knows the city well. As the movie progresses the two of them, along with Chance's uncle played by Wilford Brimley, unearth a group of wealthy financiers who hunt and kill homeless war veterans for sport.

Credit is due to director John Woo, whose American debut was thankfully spared of any Hollywood-ization. Known for his extremely violent films in his native city, Hong Kong, Woo demonstrates here that his creativeness with action scenes is not lost overseas. With crackerjack editing and slow motion techniques, Woo has created some great action set pieces, the most memorable one involving a collision between a motorcycle and a van. It is fortunate that they overshadow the plot which is essentially one of a Rambo movie.

Van Damme is better than he has been in his past films. But his character is a bore until his stops talking and starts fighting. Butler was more interesting as the emotionless android in TV's short-lived Mann and Machine. Much better are the supporting actors. Going against type, Lance Henriksen, the kindly android in Aliens, creates a memorable villain. He demonstrates this in his facial expressions which are especially good in the scene where he plays the piano. As the uncle, Wilford Brimley (the Quaker Oats man himself), sports a snow white beard and speaks in a heavy southern drawl. A cross between Santa Claus and Jed of The Beverly Hillbillies, he provides the necessary comic relief all but missing from Van Damme's dialogue.

But then Woo's strength has always been with action above story and character. So what if the acting isn't Oscar calibre and the plot is a rehash of other action films? Hard Target is such grand, glorious fun that you forget about the people in it and just have a good time. What Van Damme can do with a rattlesnake is worth the price of admission alone.