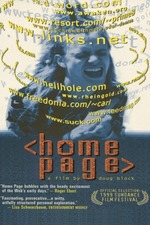 Doug Block e-mailed me last November with a PDF of the below review (from a site so defunct even archive.org doesn't have captures) and the following:

I recently came across your 1999 Varsity Planet review of my doc Home Page as I'm preparing for a 20th anniversary digital and dvd re-release in the Spring. Even though I never heard of Varsity Planet, then or since, it was about the smartest review, both of the film and the fledgling internet, in my collection from that time.

I'm just beginning to reach out to journalists who might see the film as a leaping off point for a think piece on the internet – its early promise as a revolutionary form of self-expression, and what it's turned out to be. And I thought I'd approach you first, not knowing which publication or website it might be right for but figuring you may have some ideas. If it's not up your alley for any reason, I'd appreciate being pointed in the right direction.

I dropped the ball on getting back to him. After rejoining Letterboxd, I thought it would be a good venue to re-post this very early piece of mine and direct readers to Doug's site, where you can read up on him and order the movie on iTunes: www.dougblock.com/homepage-film

Sometimes the revolution occurs right under our oblivious noses. We may thank the heavens, then, for Doug Block. His documentary Home Page captures the moment when mankind’s latest revolution, The Internet, evolved from a highly selective pseudo-messianic medium to a worldwide force as unthinkable to live without as filtered Brita water.

It’s 1996 and the New York based Block has an idea to make a film about his daughter, Lucy. As he moves forward on this project, Block becomes aware of the Internet, a new medium through which people can write and chat about themselves with and to others on a computer. Hinting at a mid-life crisis and other inner questions, Block dives head first into the new technology, devouring the mostly written personal journals that were a staple of the early web. Through these and the recommendation of a friend of a friend, Block makes contact with the film’s main character, Justin Hall, a flamboyant 21 year-old Swarthmore student who serves as his and our guide to the Internet world and its many denizens. Block follows Justin, in his Kerouac-esque search for himself and his place in the world, cross-country to San Francisco. There the web evolves with and finally away from him and the rest of the film’s web obsessed characters.

The setup for Home Page has all the makings of a standard documentary: just insert filmed talking heads and edit together into some form of coherence. Yet Block is much smarter than that and the film differs in several crucial ways that set it aside from interesting yet distant documentaries like Chris Smith’s recent American Movie.

1) Block eliminates the standard trope of the “omniscient” documenter – essentially the camera as character. Realizing that the Internet can and will affect everyone he timidly, yet essentially, joins the fray. Often Block allows the camera turned on himself and his family. The filmmaker becomes the subject, eliminating the god-like perspective that makes American Movie enjoyable yet morally questionable.

2) The technical aspects of Home Page are thought out in terms of their relation to the film. Home Page was shot on video, a highly appropriate choice that represents one personal medium – one that made home consumers into budding filmmakers – documenting the birth of another. Some may complain about the technical infelicities, a result of – as Block told me in a recent interview – the problematic video to 16mm transfer, yet they personalize the film in a way that makes its concerns all the more broad and all-encompassing.

3) Block has chosen a fascinating and recognizably human main character. Justin Hall, unlike Mark Borchardt in American Movie, is not a one-joke subject whose presence becomes monotonous in his jaw-dropping ideology. Perhaps it works best since the Internet and Justin were both at points in their lives where they were questioning their places in the world. They complement each other and evolve whereas Mark Borchardt does not evolve into any recognizable symbol of humanity through his successful failures at filmmaking. It’s something a film with the title American Movie should at least attempt to put across.

4) Home Page is beautifully structured by Block and his editor Deborah Rosenberg as a linear story. Unlike many documentaries that feel like a collection of real life skits, some better than others, Home Page comes together in its drama. It effectively ends its characters’ stories within the film yet acknowledges their continuance outside of it. Instead of credits at film’s end, Block names his characters’ web site URL’s, an encouragement to his audience to continue the film’s stories beyond the theater. It lends an ambiguous yet satisfying air to Home Page, communicating the fact that stories continue evolving and changing beyond themselves, much like the Internet does.

Home Page, in what is a first as far as I am aware, premiered on the Internet (www.ifilm.net) and home video (www.bigstar.com) on November 12th. It opens in Manhattan at the Cinema Village (22 East 12th Street between 5th Avenue and University Place) for a two-week run. Also be sure to check out Doug Block’s website (www.d-word.com) as both an introduction to and continuation of the film itself.