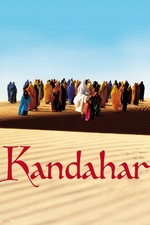 Kandahar, by the great Iranian director Mohsen Makhmalbaf, tells the story of Nafas (Nelofer Pazira), an Afghani immigrant to the U.S. who attempts to reach the Taliban controlled city of Kandahar to stop her sister from committing suicide. The film treads a fine line between didacticism and poetry. There are moments where the alternating languages (between English and several dialects of the Middle East) sound stilted and undercut the spare visual beauty. This is a minor detriment, however, as I think Makhmalbaf is more concerned with Nafas’ journey and the poetry found within.

A friend of mine who lived in Iran for a summer explained that most natives of that region, unlike most Americans, quote poetry verses to one another and this cultural influence is evident in Makhmalbaf’s mise en scène. A desert vista full of crippled men hobbling towards prosthetic legs dropped on parachutes from supply planes suggests spiritual favoritism, while the central metaphor of the final twentieth century eclipse—Nafas’ sister wants to kill herself during it—predicts cataclysmic change while holding meanings both foreboding and hopeful. Perhaps the greatest strength of Kandahar is that it manages to smash the idea of the “other,” instead opening our eyes to the realization that we are all hobbling along towards the unknowable, glancing skyward towards the heavens as we go.