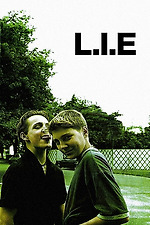 [Published September 12th, 2001, Show Business Weekly. This is a case where I find younger Uhlich's hyperbole embarrassing. I am who I was, though. Better not to deny.]

It’s rare that an American film captures the adolescent state-of-mind so clearly as does Michael Cuesta’s L.I.E. Adolescence is a time of pronounced confusion. To view it as a bridge between childhood and adulthood is to bear witness to a wasteland of indecision, and I can think of no other time when the human mind and heart can so easily succumb to the horrors of life. This psychological balancing act is a challenge to relate cinematically. Yet, in telling the tragicomic story of Howie Blitzer (the superb Paul Franklin Dano), a fifteen-year-old Long Islander whose life unravels over the film’s course, Cuesta navigates tricky terrain with a professional’s hand. His labor results in one of the year’s best films, one to stand alongside such great European works as Francois Truffaut’s The Four-Hundred Blows and Cesc Gay’s Nico and Dani (Krampack).

L.I.E. has much in common with these last two movies—the former because of its self-sufficient protagonist, the latter because of its view on human sexuality. Yet unlike Truffaut’s Antoine Doinel character, whose slowly unraveling life seemed utopian at the outset of The Four Hundred Blows, Howie is literally at a precarious point from the opening frame. Traversing the bars of a walkway over the Long Island Expressway, he seems hypnotized, as if leaving his fate in the hands of the road below. It’s an understandable reaction given the recent goings-on. Howie’s widowed father Marty (Bruce Altman) pays more attention to his new girlfriend than he does his son, while the FBI is also investigating Marty for insurance fraud. Howie, meanwhile, engages in some illegal activities of his own, robbing rich people’s houses with his best friend Gary (Billy Kay) and two other cronies. This catches up with Howie and Gary when they rob the house of Big John Harrigan (Brian Cox, in an amazing performance), a former marine and upstanding community member, who leads a double life as a pedophile. Big John confronts Howie in an effort to get his property back and, seemingly, to seduce the youngster. This does not offend Howie, as his own feelings for Gary are more than platonic, though it leads to an odd surrogate father/son relationship that neither Big John nor Howie anticipated.

The relationship between Big John and Howie is the heart of L.I.E. and brings to mind the sublime final image of Nico and Dani (Krampack) in which the sexually questioning protagonist, lounging alone on a beach, defines himself as such: Looking to his left he sees a group of women. Looking to his right he sees a man. Then he looks ahead to the ocean and goes swimming. This is given a verbal parallel in L.I.E. in an exchange between Big John and Howie. “I like girls,” says Big John. “But you f--- around with boys,” says Howie. “Confusing, isn’t it?” he replies.

It’s far from confusing because this is truly how things are. It’s hard to recall an American film that portrayed sexuality, and the psychological baggage that goes with it, so accurately. The contemporary American cinema more often goes for easy categories, a sad reflection of the herd mentality with which people view each other in our country. This applies especially to adolescents whose malleable state-of-mind can so easily be numbed and destroyed by the too-cautious and repressed adults who are their influences. Aside from the Big John/Howie relationship, Cuesta brilliantly plays out and critiques this scenario in two scenes between Howie and a guidance counselor (Marcia DeBonis). You can sense the counselor’s desire to regard Howie as a specific person, but underneath their relationship is a caution that prevents any progress from being made. The final irony is that it is Big John, the person who behaves most despicably, who is Howie’s most positive influence.

This is challenging subject matter, related beautifully on all technical and aesthetic levels, yet one result was L.I.E.’s rating of NC-17 by the MPAA. It’s unfounded, and unfortunately reveals the puritanical side of America—deep exploration of taboo ideas is often met with attempts at suppression. The double meaning of the title is no accident. The lies in Howie Blitzer’s life lead him to the precarious bridge above his metaphorical road. Yet they also lead him, and hopefully most of the viewing audience, to a transcendent personal truth. There have been two great American film explorations of adolescence this year. The first is Steven Spielberg’s A.I.: Artificial Intelligence. The other is Michael Cuesta’s L.I.E. See it to understand.